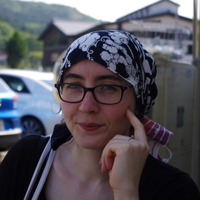 About my doctoral thesis:

In Japan, the period running from 1995 to 2004 shows a general movement of the animation industry toward the development of the digital in the production. Several challenging projects were launched then, but only a few met completion and seldom as planned. Despite those mixed results, the surviving productions shows a variety of approaches, attesting the different paths explored by the production teams.

Oshii Mamoru (1951-) is one the film-makers who took part in this exploratory movement and his practice, during the same period, shifts from a cautious and mimetic use of digital images (1989-1995) to a visually striking manifestation, integrated into each level of meaning of the films. This experimental phase starts in 1995 with the production of G.R.M. (Garumu senki), an hybrid film whose ambition is to put together animated drawings, live action elements and computer graphics in order to design a visual (and diegetic) world entirely original. Technically and aesthetically demanding, the project is difficult to fund and despite the strategies deployed by Bandai Visual, its producing company, the production is discontinued in 1998. However, the investigations led by Oshii and his team into the professional and visual organisation of the hybrid production find their expression with two subsequent movies, presented by the cineast as a pair: Avalon (2001) and Ghost in the Shell 2 : Innocence (2004).

With Avalon, digital techniques are used to rework and recompose, sometimes one by one, the frames captured by the live action camera, thus going beyond the sole SFX function to transform the live action picture into an animated picture. With Innocence, hand-painted elements are applied as textures on 3D models in order to generate depth effects unfamiliar in classical Japanese (hand-)animated drawings. Used in this way, digital images create a graphic and dynamic shift between the hand-drawn hand-animated characters and their computer generated surroundings, a shift they alternatively intensify or reduce (moving across the mimetic spectrum) depending on the needs of the scenario and the themes carried by the film. The two works indeed share an integration of digital images to their respective narration and diegetic universes: Avalon describes a quest for truth within a video game while Innocence is set in a world where electronic data has pervaded people’s cognitive and mnemonic functions.

The present dissertation shows that, on the one hand, conspicuity of the digital images in the three productions pertains to an economic requirement for technical demonstration, related to the situation of Japanese animation industry at the time, while on the other hand, and above all, it constitutes the film-maker’s original response, of narrative, aesthetic and theoretical nature, to the question of the place to assign to digital images within the cinematographic practice.